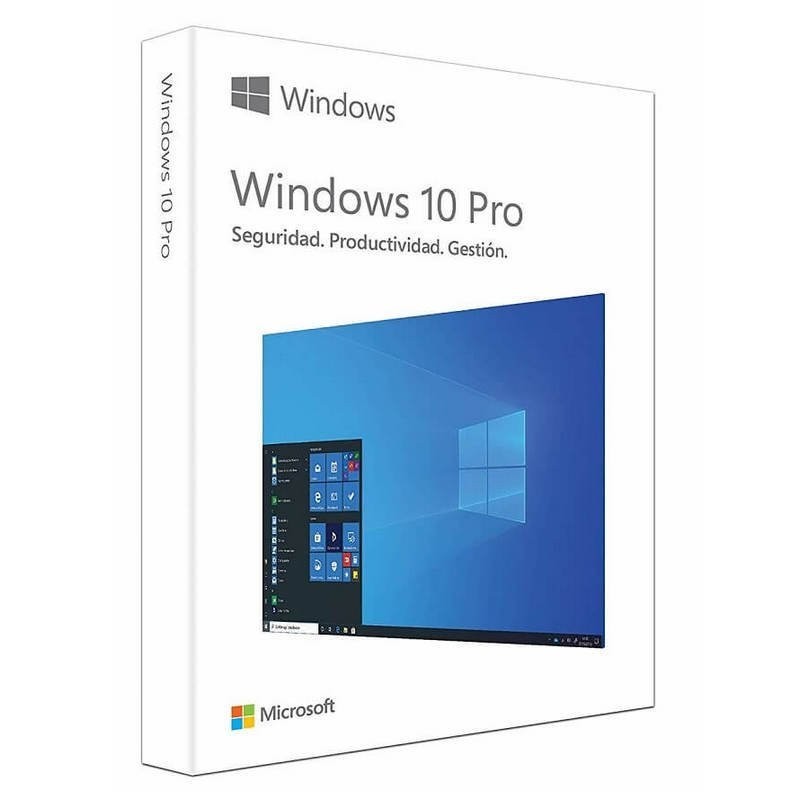 ✔️FPP license: you can activate it on a single PC but it can be transferred to another computer.

✔️Lifetime license, never expires, nor is it deactivated.

✔️With this license you can upgrade to Windows 11 Pro.

Very good value for money and very good service. I am impress

Ian
Todavia no lo he activado.

Please, login to leave a review

However, one of its most outstanding products, Windows 10, is still attractive even though its big brother, Windows 11, is already on the market; Windows 10 is undoubtedly a quality operating system that, even though its usefulness should be diminishing, has a lot to offer.

Windows 10 is an operating system that has transcended over the years, since its release on 19 July 2015. It has been acclaimed for the innovative product it was, for its interface, for its great advantages and for its very useful features, which were the icing on that blue cake.

Although, Windows 10 has not been without its critics, this does not detract from its value and uniqueness, and it is hard to imagine a world today without Windows 10.

With so many updates and improvements compared to previous Windows operating systems, as well as returning to a simple design similar to that of the also transcendental Windows XP and Windows 7, Windows 10 came to make history and put its mark on the world of operating systems and software.

To all this, Windows 10 as a good Microsoft product has several versions that adapt to different personal environments with plans and particularities in the system or applications that further enhance the Windows 10 experience, from other eyes.

Windows 10 PRO is one of these and is the one we will talk about next in this article.

Windows 10 PRO has several unique features that enhance and make your PC more suitable for work. Many of these features are refined and have a high level of proficiency so you can work smoothly and optimally.

Its basic package has all the features of Windows 10 Home with many more that support the work environment.

However, you won't be able to use almost any of these features if you don't have an Online Activation Key. Here we will show you what it is and what it is for.

What is an Online Activation Key?

It is verification from Microsoft that you have purchased the product, in this case; Windows 10 PRO.

It is used to activate the Windows system so that the operating system will work with all its features. So you don't have to worry about missing apps or needing more options to work, as they should come in the Windows 10 PRO starter package.

When an operating system is not active, things as simple as installing an application or wanting to change something in the operating system are impossible because Windows locks it down and won't allow you to do so unless you enter an Online Activation Key.

You can buy one for your Windows 10 PRO operating system after reading this article, here at the always reliable revolutionsoft.net for the low price of 34.90 euros.

Windows 10 Home is the family version of Windows 10, which makes it a more basic and user-friendly version compared to Windows 10 PRO, which, as explained above, is a professional version made for working on the PC.

So it is competent to make a comparison between the two, and thus bring to light the amazing features that Windows 10 PRO possesses:

✓ BitLocker Device Encryption: this is a Windows tool that allows you to put your files under lock and key so that no one else can access them.

✓ Windows Information Protection (WIP): this tool is designed to protect workers and their files from data leaks, keeping everyone's information safe in the company.

Among other things, Windows 10 PRO has several features that Windows 10 Home does not, for example.

✓ Mobile Device Management: also known as MDM is a feature that gives you an alternative to traditional PC management and thus helps you transition to self-paced, cloud-based management.

✓ Group Policy: this is a core management program that allows you to more easily access files and printers and manage user accounts and groups through Windows Server.

✓ Enterprise State Roaming with Azure: only available to organisations with an Azure AD Premium or Enterprise Mobility + Security EMS licence. It is a Windows device unification tool that creates a network that also supports the quick setup of new devices.

✓ Microsoft Store for Business: this is a centralised application for managing, distributing and finding apps on Windows 10 devices.

✓ Assigned Access: this is a tool that separates and protects individual identities along with their applications.

✓ Dynamic Provisioning: this allows you to optimise a device at high speed with minimal effort.

✓ Windows Update for Business: this is a helper tool that supports the search, management and control of Windows 10 updates.

✓ Active Directory Support: it is a multi-function tool that is the same as Group Policy, only it also provides domain join and group policies.

✓ Support for Azure Active Directory: allows users to be connected to their Windows 10, Microsoft 365 and other Microsoft services through a single sign-on.

To conclude, Windows 10 PRO is an amazing operating system that offers several extremely useful services for work, whether from home or an office, that you can't miss. So don't wait any longer to buy it along with its Online Activation Key, you won't regret it.

Also, if you want to optimise your PC even more; here at revolutionsoft.net/, we offer many more Microsoft products so you will always have the best options for your work.